The facial muscles would sag when you have missing teeth, it’ll make you look older. With properly fitted false teeth you can fill up and reshape your face, and make your smile look better. Have you ever wondered what the first false teeth looked like back then, and what had they been made of? 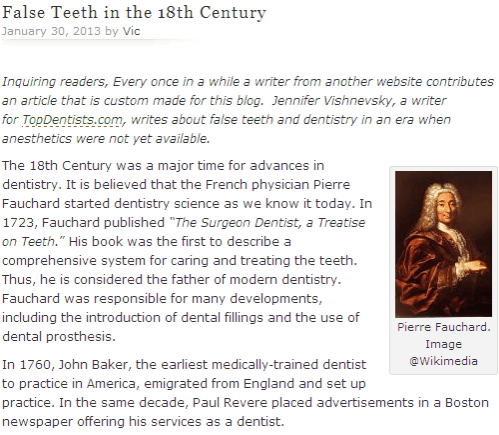 According to an article in janeaustensworld.wordpress.com, it was during the 18th century that sugar became popular and caused tooth decay to many, which became a factor for the development of dentures. “Dentists began to experiment with ivory in order to create a better foundation for dentures. Due to advances in technology, dentists could also add gold springs and plates to the new dentures. False teeth were a novelty that was mostly unheard of in earlier centuries.”

In fact, US President George Washington also wore dentures because he lost his teeth at a young age due to constant illnesses and treatment that used a medication that damaged his teeth. However, contrary to what most people believe, George Washington used the highest quality of dentures during his time, which were made of carved hippopotamus ivory. He also had several other pairs of dentures that he used during his presidency.

Full or even partial dentures were properly developed only during the course of the 18th Century. Dentists became better at making them fit, coming up with stronger adhesives to keep the teeth attached to them and designing them so as to prevent them from flying out of their patients’ mouths. By the late 18th century, there were yet more developments. Around 1774, Alexis Duchâteau crafted the first porcelain dentures. But these were prone to chip and also tended to appear too white to be convincing.

Dentures have evolved over the years; however, there is one fact about dentures that most people are not aware of: the brain has to be trained that what’s in the mouth isn’t food. The first time a person wears dentures, the brain is tricked into believing that what’s in the mouth can be eaten, which then sends a message to the salivary glands to get to work. One of the things that a first-time denture wearer should prepare for is the great amount of spit.

For some people, however, they use dental partials to replace the missing teeth in their mouth when some teeth still remains. This can be properly placed by a dentist like Dr. Kent Davis as an alternative for full dentures.
(Article Excerpt and Image from Jane Austen’s World, False Teeth in the 18th Century, January 30, 2013)

With my new 'Dentures Done Right' by Dr.Davis, I feel confident again...

I didn't know dentures could fit so securely until Dr.Davis recommended the new mini-implant...